Over 30 Months gone but GOI has not yet taken action on Allegations made against GOI by Shah Faesal ?Why affairs related to “Kashmir”/ “Kashmiri” are even in 2021 handled with no different a policy?Behaviour of Shah Faesal IAS & handling of his Resig 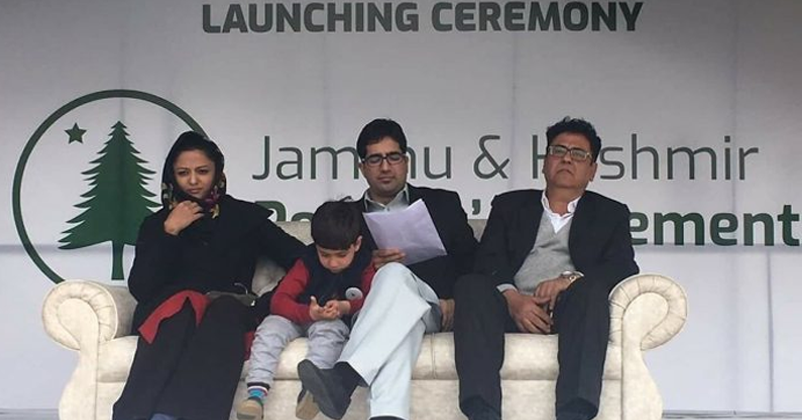 Out Look report has seen possibilities of Shah Faesal ‘joining’ the services again taking leads from .what Minister of State, Department of Personnel and Training, Jitendra Singh has been quoted as having said on 06-02-2021 in response to a question during his press conference about Shah Faesal and his recent pro-government stand and tweets - “We need not to go into this or waste our mental faculties on it. The thing is there is a change of heart,” (https://www.outlookindia.com/website/story/india-news-speculations-of-shah-faesals-comeback-to-civil-services-rife-after-govt-says-he-has-a-change-of-heart/373434 ).

Is the case so simple looking at the accusations made by Shah Faesal in his resignation letter on India Government / Security Forces / NDA that a MOS could be quoted as having expressed like that ?

One may ask who is Shah Faseal ? Shah Faesal is an IAS Officer ( 2010 Batch) who resigned from government service in January 2019 pinning very very serious allegations on Government of India and NDA which /are also of international implications from interests of India as a nation and he is still listed at serial number 36 of the Civil List -IAS on the website of the General Administration Department UT of J&K ( https://jkgad.nic.in/leftMenu/CivilList.aspx ) mentioning there in “ The officer has submitted his resignation , which has been forwarded to the DOPT, GOI for acceptance”. He had not stopped putting allegations after submitting his resignation and continued repeating the allegations through media / media interviews.Ofcourse the officers are listed in order of their cadre seniority of the day and as per the website Mr. Shah Faesal is still in service as on 24-09-2021 the day this story was slated.

The resignation letter submitted in January 2019 by ShahFaesal, te first Kashmiri to top the Civil Services Examination, has not been accepted by the government even after 30 months and as per some unofficial reports even investigation into some of his anti government posts on social media too are not concluded yet hence any speculations could be made about “this” case since he is a ‘Kashmiri’ who has been talking of ‘Kashmiri aspirations’.

1.It was reported on 09-01-2019 that Shah Faisal ,a Kashmiri IAS Officer who topped UPSC exam in 2010 had submitted his resignation notice to the Government. "To protest against the unabated killings in Kashmir and lack of any sincere reach-out from the Union government; the marginalization and invisiblisation of around 200 million Indian Muslims at the hands of Hindutva forces reducing them to second-class citizens; insidious attacks on the special identity of the J&K state and growing culture of intolerance and hate in the mainland India in the name of hyper-nationalism, I have decided to resign from IAS," said Shah Faesal.( https://www.ndtv.com/india-news/ias-topper-shah-faesal-resigns-says-kashmiri-lives-matter-in-tweet-1975171 )

So the resignation submitted by Shah Faesal does not fall in the class of routine personal problem/ reason oriented subjects but it falls in the class of even sedition / revolt against the government and hence should not have been treated the way it has been treated ; and in case it is treated the way reports are appearing suggesting that government of India may take him back in case he withdraws his resignation taking the cover of the ‘weak cover link’s in service rules to interpret the affairs the action is surely going to push the common man of J&K in more confusion as regards the status and issues concerning the Indian state of J&K that acceded to India Dominion in 1947 completing the process of oneness in governance since Governments in the Centre have not so far even made the lining between the mainstream and separatist well clear like those who bear the concepts like “self rule”/ “Achievable Nationhood” are still considered as mainstream. And the way the resignation of Shah Faesal / conduct of Shah Faesal has been so far handled may add another leaf.

Ofcourse the way Shah Faesal IAS has acted and the way his case has so far been handled by Government of India also raises questions on Selection Procedures & Standards being adopted by UPSC ( India ), receiving and handling of trainees by Lal Bahadur Shastri National Academy of Administration Mussoorie worth upholding the Mission statement of academy & DoPT ( Ministry of Personnel, Public Grievances and Pensions GOI ).

IAS officer Shah Faesal hit the media lines with prominence 1st on when he qualified UPSC Civil Service Exam 2009 with rank -1 in May 2010 and even the then Prime Minister Dr. Man Mohan Singh congratulated him in person in New Delhi on 26th May 2010, 2nd when he was reported to have submitted his resignation on 09-01-2019 , 3rd on 17-03-2019 when he floated a political party ( Jammu and Kashmir People's Movement ) and 4rth time when he resigned from ‘his’ political party on 10-08-2020 and speculations started emerging immediately thereafter that Shah Faesal may withdraw his resignation (11-08-2020 :Speaking to Outlook, Faesal says that the period of detention has brought in him a transformation and offered him a “ringside view” of Kashmir politics ) / may be allowed to withdraw resignation by government of India ( some media also reported on 06-02-2021 such likelihood with indirect reference of a MOS in Union Government who was said to have expressed that there should be no objection in case there is a change of “heart”).

Faesal submitting resignation had hit even the international media which was much less for his being just from IAS Cadre but was more for the air that he had been given for standing first in UPSC CSE exam 2009 and that too for being from Kashmir Valley ( why was he given so much of AIR by the people outside J&K was not understandable since he was not the only of the class since even in 1982 in the UPSC 1981 CSE Er. Khurshid Ahmad Ganai- M. Tech IIT Delhi- had stood 2nd in the list and much above that for the reasons he had given for resigning from service.

Government of India not disposing of the resignation of Shah Faesal even after 30 months of his making a submission for his quitting ‘Superior most’ service class from among the Government of India Services with reasons looking more like , rather no less than, what even the people who have been talking of issues like ‘Kashmir issue’, J&K not being a unit of the union like other Indian States, atrocities committed on the common man ( Kashmiri ) by State agencies and aspirations of the common people ( Kashmiri),unfair treatment with the Indian muslims and like surely makes those who have some information about the contents of his resignation letter feel at loss to understand the strategies held by even the present NDA government for handling J&K affairs.

What Shah Faesal has (who still appears at Sr.36 of the list of J&K IAS officers https://jkgad.nic.in/leftMenu/CivilList.aspx ) said in his resignation letter of 09-01-2019 would have normally moved any government for immediate action worth removing any possibilities of common man of Indian state like that of J&K ( Kashmir region in particular ) further getting pushed more into myths & controversies regarding J&K being a normal ‘state’ of Republic of India but that has not happen. Mr. Shah had gone to the extent of reasoning his resignation "To protest against the unabated killings in Kashmir and lack of any sincere reach-out from the Union government; the marginalization and invisiblisation of around 200 million Indian Muslims at the hands of Hindutva forces reducing them to second-class citizens; insidious attacks on the special identity of the J&K state and growing culture of intolerance and hate in the mainland India in the name of hyper-nationalism……“ Enough of the material is available on social media, print media and electronic media for any one who wishes to know more about what he has been saying before August 2020 and what regrets he has said since August 2020 which surely can not be accepted as simple clarification or regret or self realisation worth treating him as ordinary defaulter and treating his resignation as routine resignation worth processing the same in terms of normal service rules/ conduct rules related to submission & withdrawal of resignations since the reasons mentioned in the resignation do not fall short of even some thing like ‘sedition’ .

And there is a need for even issuing a white paper in this regard explaining why delay on the part of DoPT, what action is being taken against the ‘officer’ other than any other administrative action required under conduct rules since some media reportings saying that Faesal may withdraw his resignation and government may allow him do that have already done enough damage to the process of undoing the ideological pollution that prevailed in Kashmir valley before 2019.

Not only that the style in which Shah Faesal submitted his resignation and the way he appeared before the Indian and international media after submitting his resignation / after 5th August 2019 also raises questions on Selection Procedures & Standards being adopted by UPSC ( India ), receiving and handling of trainees by Lal Bahadur Shastri National Academy of Administration Mussoorie worth upholding the Mission statement of Academy & working of DoPT ( Ministry of Personnel, Public Grievances and Pensions GOI ).

Selection of Shah Faesal has been made by UPSC for IAS cadre of services the member of which service in the prevailing conventions qualifies for almost all superior services ( apex) of GOI/ State governments for posting as Administrative Secretary to Government of India/ any State Government for any Administrative Department including Cabinet Secretariat/ Defence /Home /Power / Chief Secretary in a State ( one may very very rarely find an IPS officer even as Home Secretary GOI or an Indian Engineering Service Officer even as Power Secretary GOI and like ) and hence the manner in which the said officer has conducted his self surely raises questions on Selection Procedures & Standards being adopted by UPSC ( India ) atleast for assessing the suitability and integrity of the applicant w.r.t national and community commitment standards during the personal interview as otherwise even a simple graduate from any stream is qualified to apply, many engineers / doctors choose the subjects for UPSC civil service exam that they have never studied and even clear written exam with top merits . Similarly Lal Bahadur Shastri National Academy of Administration Mussoorie too has the responsibility for reading and polishing the personality of the recruited trainee officer worth the “mission” under which an IAS officer has in a way to deliver the ultimate in a democratic set up. And more so DoPT ( Ministry of Personnel, Public Grievances and Pensions GOI ) has to keep a regular watch on the conduct, convictions & understandings of the recruited officer for his/her advancement in career and in the present case the officer has remained on active duty even in a state like J&K for nine years before he lodged very very serious / damaging allegations on Government of India and Indian leadership.

So keeping in view the status in the services of the union that the IAS cadre has been so far given may be after a expert review is conducted need is felt for conducting the selection process of the IAS recruits independent of the present civil service exam that the UPSC conducts.