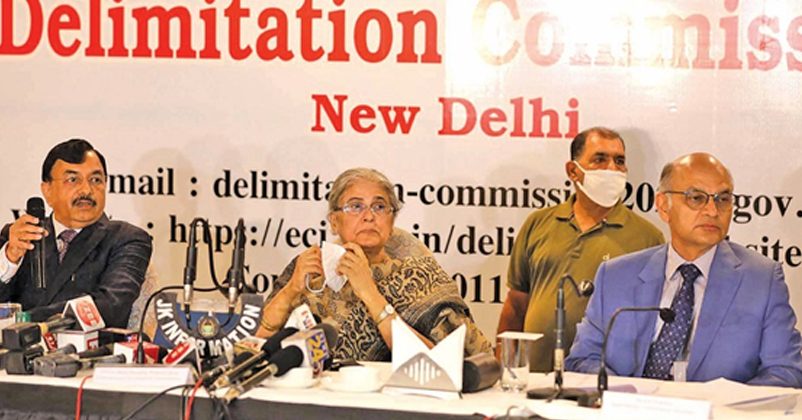 PDP President and Ex. Chief Minister of J&K State Mehbooba Muftiji has been reported having remarked on this 18th December while talking to reporters after addressing a party convention in Rajouri that the present Delimitation Commission (DC) for UT of J&K headed by Retd. Justice Ranjana Prakash Desai has “the agenda” of ‘BJP’ to work with. It is not fair on her part to lay “allegations” on the wisdom of Commission which is headed by a retired Judge of Supreme Court of India ( with Ex-Officio Member Shri Sushil Chandra CEC of India, Ex-Officio Member Shri K.K Sharma State Election Commissioner J&K .with Associate Members as MP Dr Farooq Abdullah, MP Mr. Mohammad Akbar Lone, MP Mr. Hasnain Masoodi, MP Mr. Jugal Kishore Sharma and MP Dr. Jitendra Singh MoS) and has yet to make any order. Rather the DC for the first Legislative Assembly of UT of J&K has before it the ‘Agenda’ for undoing the wrongs done in the past to the people of J&K living in the distant, backward & bad areas and may be Ms Mufti is disturbed that most of such areas are outside Kashmir Valley.

Will Mehbooba Mufti tell whose agenda was before the DC in 1995 when by the April 1995 order of the then Delimitation Commission 46 MLAs (out of 87 ( Member Legislative Assembly including 4 for Ladakh) were distributed over the areas in Kashmir Valley that otherwise had as per Section-50 of J&K Constitution only 12 elected MLCs ( Member Legislative Council) but so contrary to method of proportions and so brutally, even defying guidelines ( four out of five parameters in favour of areas outside Kashmir Valley) as slated in J&K Representation of People Act of 1957 ( Act IV) for deciding the single member constituencies in the Legislative Assembly, distributed only 37 MLAs over the areas outside Kashmir Valley that had as per Section-50 of J&K Constitution 14 elected MLCs ? That was the time when there was Congress Government in Delhi and there was also President Rule in J&K.

Even Ghulam Nabi Azad who has in Dec 2021 addressed rallies in the Disrticts of Poonch/ Rajouri/ Ramban expressing concern for the people there need to answer where was he in 1995 & there after ( ofcourse before 1979 he did not matter) and should not he now instead work to assist the DC through any possible channel to get the corrections applied which if applied under the law of the day { Sections – 59 & Sub- Section-2 of Section-60 of J&K Reorganisation Act, 2019 (34 of 2019) and the provisions of the Delimitation Act, 2002 (33 of 2002) where in population is only one of the 5 parameters } are likely to almost reverse the distribution now out of 90 MLAs ( amended strength) with respect to the two regions of J&K very much like 14:12 :: for Areas outside Kashmir Valley : for Areas in Kashmir Valley.

The wrong earlier ‘Distributions’/Delimitation if now corrected shall surely be of more benefit to the areas having very large Muslim population too so it is not fair for leaders like Mehbooba Mufti ji to push the issues into communal controversies. No doubt Associate members MP Shri Jugal Kishore Sharma ji and MP Dr. Jitendra Singhji MoS too have a very testing responsibility for assisting the DC with adequate ground inputs although they don't have any voting right..