Shahtoot dam a gift for Afghans from India 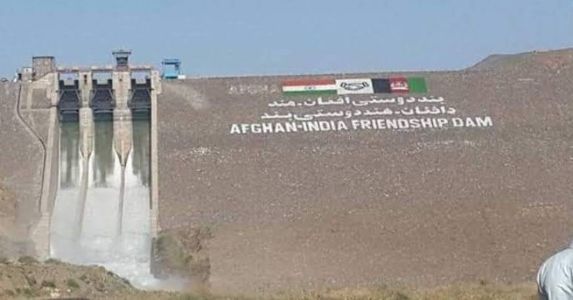 Sant Kumar Sharma
Jammu, February 16:
When India signed an agreement with Afghanistan some days ago for the construction of Shahtoot dam over Kabul river, there was lot of heartburn in Pakistan. The deal on the construction was signed by the foreign minister S Jaishankar with his Afghan counterpart. This was done in presence of Afghanistan President Ashraf Ghani and Prime Minister Narendra Modi.
Pakistanis simply cannot accept it gracefully that this will help provide drinking water to 20 lakh Afghans. For past many years, this project was being discussed, in the Indian, Afghan and Pakistani media. Most reports emanating from Pakistan invariably talked in terms of the dam affecting flows into Indus river as Kabul river meets the former at Attock.
Now that construction of Shahtoot has been firmed up, Pakistan commentators are likely to whip up more negative publicity about India. Not that it should dent the Indian resolve to help the Afghans. Carry on regardless (of what Pakistan says) is what India needs to do in most spheres, extending help to Afghanistan included.
It is worth mentioning here that Kabul, the Afghanistan capital, is a city planned for barely one million (10 lakh) people. However, currently over five million (50 lakh) people jostle for space here. Shahtoot project, if allowed to be completed by Pakistan, can be of tremendous help to the Afghans.
The plain and simple fact is that Pakistan doesn't want any projects to be built in Afghanistan. This ensures that the entire discharge of the Kabul river flows into its territory unimpeded. Its water experts had talked of joint development of the Kabul River Basin (KBR) two decades back. Even earlier but beyond lip service, Pakistan did nothing to actually harness the nature's gift for mutual benefit.
Keeping Afghanistan unstable so that there is little, or no development there suits Pakistan's interests. This is a policy which it has pursued for the past half century and beyond saying goody goody things, it did nothing to help Afghans. Some decades ago, when it had some money in its coffers, Pakistan preferred to join the arms race with
India.
Rather than build dams, small and big, on the rivers that flowed in its territory, building atomic bombs was a higher priority. So, apart from whatever water development happened in Pakistan as part of Indus Waters Treaty (IWT) with India, signed in September 1960, it invested negligible percentage of its own resources in this sector. The results of this profligacy will be there to haunt it in the very near future.
Pakistan is in dire economic duress now and has no money to spare for working on any joint infrastructure projects with Afghanistan. Even if it wanted to change the way it has dealt with Kabul so far. As for Afghanistan, the war ravaged nation is practically living on international doles nowadays. The help from India is more than welcome as the Shahtoot project promises to fulfill a basic need of drinking water.
Just like the vaccine diplomacy it has been pursuing with its neighbours, and friends, the building of Shahtoot project is an Indian masterstroke. A vast section of the Afghans  wants fast completion of Shahtoot project so that their drinking water needs are met. The power generation by this project is an added bonus. In fact, inking this project has given them hope that more dams, at least a dozen more, can be built with help from India.
Most Pakistani commentators say India is helping Afghans to spite them but it remains a fact that their country has no water sharing agreement with Afghanistan. Nor are any serious talks underway between Afghanistan and Pakistan government regarding joint water development.
With very few dams in Afghanistan, over 75 per cent of water of rivers that originate in its territory ends up flowing into the neighbouring countries. Except Tajikistan, all its neighbours like Uzbekistan, Turkmenistan, Iran and Pakistan are deficient in water. These deficiencies can largely be attributed to inefficient management of most rivers.
Presently, the annual per capita availability of water in India is approximately 1,500 cubic metres while in Pakistan, the figure is just 1,000 cubic metres and going down further. One of the basic reasons for this is rapid increase in population of Pakistan. Other contributory factors are seepage, water wastage and lack of coordinated strategy for water conservation. Instead of looking within, and sorting out its own mess, Pakistan has always preferred to blame India for its water scarcity. The trend is unlikely to die any day in the near future.