The Early Religious Life of Kashmir 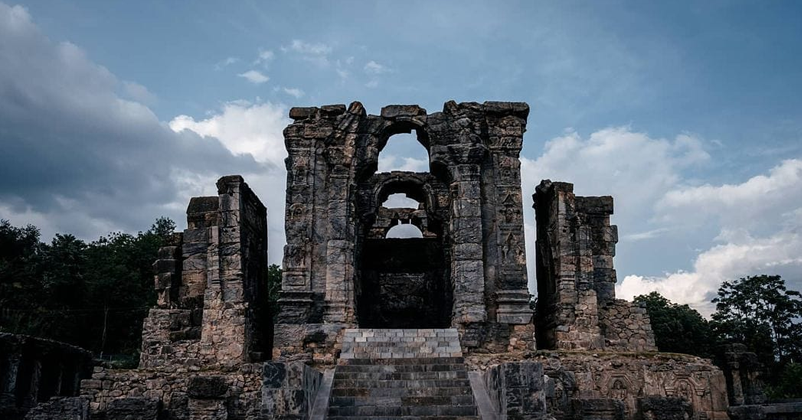 The valley of Kashmir is surrounded on all sides by a chain of mountain ranges. To the north lies a series of mountains which hasten away in wild confusion to the great promontory of Nanga Parbat (26,182 feet). To the east rises Mt Harmukh (16,903 feet) which guards the valley of Sindh, a major tributary of Jhelum River in the Ganderbal district. On the south is Mahadeo looking down upon Srinagar, the high range of Gwash Brari- the Goddess of Light (17,800 feet) and the lofthy peak of Amarnath (17,321 feet). The Pir-Panjal range with peaks of 15,000 feet or more stands on the south west, over which ancient trade routes with Punjab lay. Further north is the Tosmaidan (14,000 feet) and in the north-west rises the majestic Kajinag (12,125).

Walled off by such high mountains and endowed with unequalled natural beauty, Kashmir remained a protected sanctuary of Indian culture for hundreds of centuries. Buddhism, Shaivism, and Sanskrit learning flourished in the valley and produced a remarkably rich culture. The integration of Kashmiri life was so complete that Kshemendra, a staunch Shaivaite, produced a remarkable book on the Avadanas of the Buddha. The work was considered as a classic in later Buddhist literature. It’s therefore important to understand the early religious life of Kashmiri people.

Naga worship most properly referred to as Naga cult in India is one of the oldest and wide spread forms of religion. Many experts on Kashmir have put that Nagas were the tribal people living on the mountain slopes of entire northern belt of the country. Usha Mishra, in her book “Religious History of Kashmir” notes that the evidences from Mohenjo-Daro and Harappan sites tend to suggest that snakes’ worship was a feature of the Indian people whose branches had spread to the land of Kashmir. The sources such as the Nilamatapurana, Kalhana’s Rajtarangini and the Vasukipurana suggest the origin of Naga cult in the region of Kashmir. Accounts of Chinese travelers such as Fa-Hian and Heuen Tsang and Abul Fazal, the royal courtier and the author of the Akbarnama, mention that there were several places sacred to the serpents in Kashmir.

According to Nilmatapurana in the 4th and 3rd century B.C., it might have been the principle religion of Kashmir. Nagas are said to have been born of Kadru, wife of Kashyapa, one of the Sapatarishis, the seven ancient sages of the Rigveda. Christopher Snedden, in his book “Understanding Kashmir and Kashmiris” says that the name Kashmir could have been a shortened form of ‘Kashyapa Mir’ (the lake of the sage Kashyapa) or ‘Kashyapa Meru’ (Kashyapa’s Mount Meru). The Nilamatapurana records at a great length how Kashmir was created out of water and left to the care of the Nagas of whom Nila, the son of Kashyapa, was the chief.

The Buddhist Tradition of Kashmir

Buddhism seems to have obtained a footing in Kashmir as early as the 3rd century B.C. when most of the Nagas started following it. The Ceylonese (Sri Lankan) chronicle Mahavamsa preserves an account of the introduction of Buddhism in Kashmir by Majjhantika (Madhyantika), an Indian Buddhist monk who received teaching from Ananda. Further, the Tibetan work Dul-va and the account of Heuen Tsang, a Chinese traveler to the valley have also recorded that Buddhism was first preached in the region by Madhyantika.

Kalhana’s Rajtarangini has mentions that suggest Kashmir formed the part of Ashoka, who was follower of Buddha. As per the accounts of the Chinese pilgrim Heuen Tsang, the Stupas built by the emperor existed even during his visit to the valley. In his accounts, he has further noted that Askoka was zealous in preaching and disseminating Buddhism in the length and breadth of his kingdom expanding unto the secluded valley of Kashmir.

In his book “Early History and Culture of Kashmir”, S. C. Ray has noted that Buddhism seems to have been overshadowed by growing Shiava and Vaishnava faith during the reign of King Lalitaditya Muktapida of Karkota dynasty. The Martand temples of Anantnag city of today’s Kashmir shows the memories of Lalitaditya. King Avantiveraman (A.D. 855/56-883), the founder of Utpala dynasty supplanted the Karkotas. He was a staunch follower of Shiva and Vishnu. The architectural remains discovered from the site of Avantipura, the town founded by him depicts images of Vishnu, Shiva and other Brahmnical gods.

The ancient and early medieval history of Kashmir portrays the region as the important seat of Vaishnavaite learning and spiritual culture. Works such as Nilamatapurana, Rajtarangini and the Pancharatra rituals in the Kashmiri Vishnudharmottara Purana have ample anecdotes of the spiritual tradition.

Lalitaditya, the illustrious king of Karkota dynasty was also a devotee of Lord Vishnu and built glorious silver statute of Vishnu Parihasakesava in the town of Parihasapura. His queen Kamlavati put up a large silver image of Kamalkesava (Lord Vishnu). The Utpala dynasty who succeeded the Karkota dynasty too worshiped Lord Vishnu in his many forms e.g. Avantiveraman and his brother Suraverman built the temples of Vishnu Avantiswami and Suraveramnswami respectively.

Besides Vishnu and Shiva there were many other Hindu gods and goddesses in the early Kashmirian pantheon. The most important of them include Surya, Kartikeya, Ganesha, Agni, Lakshmi, Durga, Ganga, Yamuna and Kamdev. Innumerable literary evidences of their worship and some of their images too have survived and accounted for.

(Vivekanand Nartam is an Assistant Professor of Political Science at Shyam Lal College, University of Delhi.)